Ask yourself, Is government based on the will of we, the people?

If, your answer is NO!!! then do take part in this Referendum by, for and of YOU!!!

By now, you are educated and informed as to Your Rights and your sovereignty;

And, you have read the 110 page Affidavit of Probable Cause – UNITED STATES OF SOUTH AFRICA

And, so you know that  since 1994, instead of taking the highway of freedom paved by the Freedom Charter and the Reconstruction & Development Programme, South Africa made a short left towards the Washington Consensus and we the 99% were sold down the river in 1993-95; and, instead of a lawful government, privately-owned federal corporations operating under RSA Inc. have hijacked our Republic;

You know that voting in national elections is voting for an evil system, the new world order; and, politics is the tool used by the 0, 1% global elite to divide, conquer and rule the 99% ; and, then use the greedy and power-hungry 1% to enslave the 99% for the benefit of the less than 0,1% ; and, voting in political elections is where the 99% give their rights away to the 1% who then claim un-checked corrupt power and abuse it;

And, you now know that the only way to beat an evil system is to unite in one common cause and action: – We The People Movement

And, you know that to restore the Republic and un-vote the  debt slave system we, the people must take action and must take part in a Referendum by, for and of the people;

Now, we have studied the law and your rights and the remedies long and hard; and, we can see no other way, but to hold a referendum, to put us back on track where we left off in 1994; local self-government;

Your wet ink signature is your will and voice; and, it gives We The People SA the authority to re-claim back the power for the 99% and fulfil the aims and objectives of WTPSA; fulfil the Freedom Charter and RDP; direct representation; direct local self-governance; and, self-determination;

Freedom from debt slavery and justice is waiting for you to stand up and to unite and to take action; as simple as one two three;

The Southern Africa Referendum will run until the April 2019 Elections;

From the RSA Referendum document:

Q: What will my vote be used for?

A: The people shall govern

Let your voice be heard! Vote for Yourself! Vote for Freedom from Slavery!!!

Referendums are Powerful Tools for Change

Switzerland: A Rebellion Is Brewing Against the Bankers’ Shenanigans

Late last year, the Swiss Federal Chancellery was sent a petition with 110,955 signatures, demanding another national referendum. That referendum was spearheaded by activists from the Sovereign Money Initiative. The goal of the referendum is to ban the creation of money by private commercial banks and force a return to the use of actual, tangible money. Source: http://www.strategic-culture.org/news/2016/04/11/switzerland-rebellion-brewing-against-bankers-shenanigans.html 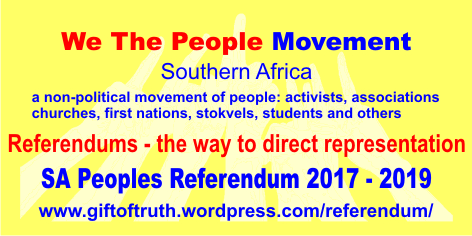 Referendums – the way to direct representation

I believe that the issue of absolute government decision-making is tempered in two ways: strong state institutions and the possibility of direct participation by way of referendum. In respect of referendums, the Constitution makes provision for either the president (in respect of a national referendum) or a premier (in respect of provincial referendum) to call for a referendum in terms of an Act of Parliament. Twenty years into our democracy and no such Act exists. I am of the opinion that this effectively denies citizens the opportunity to directly participate in important decisions which affect them.
Our law allows for referendums. But since there is no empowering law governing how, if or when to hold a referendum, South Africans are currently being denied any opportunity to participate in executive policy decisions, particularly policies that are unjust and incite public outrage such as e-tolls. I would not even consider an election as an appropriate proxy for direct participation since South Africans vote for one party with many different policy proposals. A voter may not necessarily agree with every policy put forward by the party for which they voted. Therefore, the only option left to protest an unjust policy is through civil disobedience.

WTPM have weekly online meetings on Zoom; email us at commonlawsa@gmail.com to receive the zoom links and to add you to the mailing list;

Join us in discussing the practicalities of the SA Peoples Referendum; and, any questions and or positive contributions you may have;

Together we stand or fall apart;