Ad this is why emancipation is so necessary;

In 1929 the Holy See received a treaty signed by Benito Mussolini representing the Italian Government, allowing separate international city-state status to Vatican City, and soon after that, the Vatican — sprang back to life in a big way and took charge of the finances and property management interests of the Roman Church.

Part of that apparently included identity theft, unlawful conversion, breach of trust, impersonation, and fraud practiced against a large number of singular, organizational, and family trusts entrusted to the Holy See prior to the 1930’s and ever since.

The same sorts of abuses occurred with respect to our National Trust(s) and their treaties with the Holy See, which, whether on land or sea, were operated in Breach of Trust by the Vatican, which has no valid standing as a Treaty Partner or Principal.

Again, the story is the same. Donors entered into a trust agreement of some kind with the Holy See, with the Holy See charged with Trustee responsibilities — which the Holy See handed off to the Vatican in the early 1930’s and ever since — and then neglected to supervise. The Vatican has been allowed to run wild and promote many financial crimes against the actual owners and beneficiaries of these trusts.

So, the upshot of this is that the Holy See has been caught in Gross Breach of Trust and Dereliction of Duty owed to the Donors and Beneficiaries of all these trusts. It has failed both the Donors and the Beneficiaries, and has secondarily handed our assets off to “Administrators” and “Agents” who are not Trustees and who are not accountable to us.

This is a Gross Breach of the Trust owed to each Donor and each Beneficiary. Both Donors and Beneficiaries have been preyed upon and abused by these secondary “Administrators” and “Agents” who have uniformly plundered and misused and misdirected our assets to engage in such things as war-for-profit, pillaging, and extortion.

Now come the Donors of these Trusts demanding both remedy and cure; and, standing as men and women possessing Divinity and claiming Divine Redress, we all say that the Holy See is at fault for this and is responsible for all suffering, loss, or damage incurred by this unauthorized and secondary administration by Agents of the Vatican.

With regard to the D’Avila Family Trust Assets, 333, 555, 777, and 999, the Holy See is directly responsible for their recoupment and return to the Donors, and specifically to the man approved by the Spanish Courts, Philippine Courts, and United States Federal Court to hold the General Power of Attorney over the Family Trust Assets, allowing him to disentangle his family’s assets from the Estate of the Vatican Agent, Severino Sta. Romana, and any other deposits, assignments or allocations made from these accounts by unauthorized Vatican Administrators.

We suspect that similar conditions affect Account Codes 111, 222, 444, 666, and 888 and we note that the fake Tiburcio Villamor Marcos, aka, actor Alex Tallon, is claiming to be the owner of the 666 Account, which we believe to be the “Blood Money Account” representing the value of the labor of the people victimized by this scheme on a worldwide basis —- that is, funds from an illegal source have been used to fund the 666 account which this criminal is apparently accessing and using to promote war and other forms of criminality for profit.

Ferdinand Marcos used assets from the D’Avila Family Trust to fund his own Family Trust and Foundation without authorization from the Donors or the actual Trustees, and it also appears that funds belonging to the D’Avila Family Trust were used to fund the Nazis by these same Vatican Interlopers, and that Swiss Authorities including the Bank of International Settlements and also the World Bank, Federal Reserve, and Federal Trust all knew about this and did nothing.

These crimes of personage and misrepresentation and fraud in breach of trust must come to an end and the assets must be recouped and returned to the actual owners without further obstruction, obfuscation, or delay in restraint of trade.

This train wreck has left the Central Banks and the Commercial Banks, both, operating in a criminal fashion, one engaged in criminal commodity rigging, the other involved in criminal securitization schemes—- and all of it made possible by using other people’s money without their consent.

This Whilte Collar Piracy has to end and the sooner the better.

What remains as a viable alternative to the Train Wreck is to reboot the financial system via the International Trade Banks and return to asset-backed money, using digital recording and transfer systems that do not impose any kind of cash-less society model.

We have authorized the issuance of new coinage and new asset-backed certificates to replace the “Federal Reserve Notes” that have been based on the illegal and immoral practices of peonage and enslavement, resulting in taxes levied against the labor of living people. We demand that all funds related to these practices be recognized as coming from illegal sources, be impounded, and returned to the actual owners if possible, and to their progeny, if not, or finally, in the case of unclaimed and unassignable returns, to our Federation of States, for the succor of General Public.

We require that all Municipal Employees and all British Territorial Employees be made aware of their separate and voluntary and hopefully, temporary, political status. We further demand that they be taught that Americans are not generally subject to any Federal Laws that are not published on the Federal Record and standing within the Constitutional scope of the Federal Government, nor are Americans subject to foreign State-of-State Franchise Statutory laws.

These and other issues of misadministration promoted by the Vatican Administrators must be faced, must be addressed, and must be corrected.

Let me remind everyone reading this: “Sovereign bond prices depend on investors’ perception of public debt sustainability.” How can any Public Debt be sustained without a General Public in evidence? Both our actual political status and our ownership of our assets must be admitted and credited immediately.

The United States of America

See this article and over 3600 others on Anna’s website here: www.annavonreitz.com

What a firestorm of criticism hit my desk.  Oooh, wee!

Note that I am not a Roman Catholic.  Since I found my Evangelical Lutheran Church functioning as an incorporated franchise of foreign corporations and selling Baptismal Certificates, I haven’t belonged to any church, okay?

Once we find evil, we have to oppose it.

And not just by waving our hands and feeling helpless.

When I find evil or crime at work, I don’t wait for help.  I stand against it.  Unequivocally.  Alone. I take action and don’t look back, because that is my responsibility.  I have to do what I have to do. And so do you — for yourselves, for your families, for your countries, and for your futures.

So, I am not Catholic.  I have no voice in the inner workings of the Roman Church, much less the Roman Catholic Church — two separate things, one secular, one sacred, both severely messed up and in need of immediate corrective action from within.

American Catholics are faced with a Double-Whammy, both their church and their country under assault from within at the same time.  How could it come to this?

Think back.  Think of the Albigensian slaughter.  Think of what the Inquisition did. The Crusades.  Think of the Church slow-roasting Jacques de Molay alive in front of Notre Dame to force him to tell them where their money went.  Think of them doing the same thing to William Tynsdale and other Christian scholars for the “crime” of translating the Bible.  The wanton slaughter of  South American Indian nations.  Ignatius Loyola killing for Christ.  The grotesque Oath that Jesuit Priests were required to take during the Anti-Reformation.

And this is far from the first time that there have been outrageous claims of pedophilia and torture and child sacrifice and money laundering and relationships with criminal syndicates and other profoundly nasty things associated with the Catholic clergy.

There have always been things like this in Catholic History that make no sense if you are dealing with a Christian Church — horrible things that are absolutely and diametrically opposed to the teachings of Yeshuah.

And the answer to this mystery  is?

That the Roman theocracy crouched in back of the Church is pagan.  Is now.  Always has been.  And the species of paganism being practiced by this Roman theocracy changes over time, to the point by now, they are advocating cannibalism.  Literally.  As a doctrine.

This pagan theocracy has come out of the closet as various iterations of the Holy Roman Empire.  Inevitably, it has acquired such a bad reputation that it has been driven back underground and been suppressed, but, the Roman theocracy still carries on the functions of government, maintains armies, gets involved in the coinage of money, banking, and issuance of credit, indulges in politics, collects taxes, issues patents and copyrights, creates corporations, and  preys upon its own citizenry, as other governments have done.

So, the Good Church is flanked by the Bad Church, and the people who are members of The Roman Catholic Church — the vast rank and file of over 1.2 Billion members, are left in the dark.  They are unable to raise their voice and correct any part of the pagan theocratic Roman Church government, because, for the most part, they aren’t even truly aware that it exists— and unless they have been initiated by doing things like drinking baby blood, they aren’t considered members of this pagan cult.

Rank and file Catholics don’t have a vote, though they suffer all the results of this unseen Roman theocracy running amok.  Just as they suffer the results of being classed as Municipal citizens of the United States, without knowing why.

Now, at least, they know why, and have a chance of doing something about it.

See this article and over 3600 others on Anna’s website here: www.annavonreitz.com

Mother of all Deceptions: The Concept of Modern Day Slavery: With introduction by Anna von Reitz

A CALL ON INDIGENOUS PEOPLES

On May 1, 2016, a group of indigenous peoples, hereditary chiefs and elders will arrive in the city of Paris France where they will take their first steps of a historic pilgrimage towards Rome, Italy, along the ancient Via Francigena Road.

Why we are marching

We undertake the Long March to Rome to remember the countless millions of indigenous worldwide who for 500 years have suffered and died through the wars, forced resettlement, disease and conquest justified by two papal orders or bulls, called Romanus Pontifex (1455) issued by Pope Nicholas V and Inter Caetera (1493) pronounced by Pope Alexander VI.

These papal bulls are the “blueprints” for the Age of Discovery since they granted explorers the absolute right to:

“…invade, search out, capture, vanquish, and subdue all Saracens and pagans whatsoever, and other enemies of Christ wheresoever placed” and to “reduce their persons to perpetual slavery”.

Incredibly, neither of the two papal bulls has been officially revoked to this day. 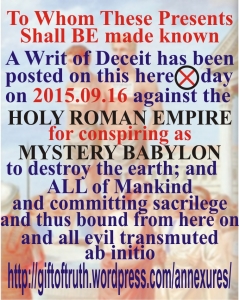