– “…The Neoliberal Agenda trumpets “free trade” because “free trade” is a cover for “free capital flows.” Once capital is free to flow from central-bank fueled global corporations, no domestic bidder can outbid foreign mobile capital, as those closest to the central bank credit spigots can borrow essentially unlimited sums at near-zero rates–an unmatched advantage when it comes to snapping up resources and assets”

Rising income and wealth inequality is causally linked to globalization and the expansion of Darwinian trade and capital flows.

Stripped of lofty-sounding abstractions such as comparative advantage, trade boils down to four Darwinian goals:

The rush amongst the super-rich started after the key event of 2014; this single stunning event suddenly sparked that rush by the super-rich to buy nuclear-proof bunkers, and the rush has been nonstop since that event.

Though many news-media in The West have reported on the existence of this suddenly booming market for luxurious and supposedly nuclear-proof bunkers, none has reported on what actually caused it — the event that had sparked it.

In fact, that event is still a secret in The West — not publicly mentioned here; it is, practically speaking, banned from being publicly even mentioned, in The West. So: since that event is necessarily mentioned in this article, and is even linked-to here, so that the reader can see videos of it that were posted of it online while it was happening, and there is even “smoking gun”…

The Most Revolutionary Act

First it monopolized the online retail space; then it made a dramatic appearance in the bricks and mortar grocery sector with its acquisition of Whole Foods, and lately it has been preparing to take on both the pharmaceutical & healthcare sector,  and even banking.

And it’s only just starting, because as Housing Wire notes, Amazon is now looking to get into the mortgage lending business. The company for which barriers to entry simply do not exist, was first reportedly planning on starting with offering checking programs first, then move into the debt product space after. And now, Housing Wire confirms that Amazon is currently looking to hire someone to lead their newly-formed mortgage lending division.

Here, a humorous aside from the report author, who refuses to provide the identity of the mortgage lender firm that Amazon has targeted:

Due to non-disclosure agreements, we probably shouldn’t reveal…

The Media Is Grouped And Organized By The Council On Foreign Relations.

“…we are witnessing the end of an empire and they all rhyme in fiscal and monetary bankruptcy. History will show…”

Message of the day to homeowners and their lawyers: “stop admitting things that you assume are true. By admitting those facts you are hanging your client or yourself. Even the client is apt to say “Yes that is my signature on the note” when it has been described by opposing counsel as the original.   In most cases the document might look like an original but it isn’t.
The proper response is “From what I have learned from expert analysis, I doubt it. I do not remember the appearance of the original note. I don’t know if what you are handing to me is the original and therefore I don’t know if that is my actual signature or if it is a reproduction of my signature using mechanical devices to recreate my signature.”
The attorney or the homeowner is not a forensic document expert.
So if the homeowner is asked

The two main political parties compete to see which can be “tougher” on crime. Congress enacted 92 death-eligible crimes from 1974 to 2010. A first-time drug offense in the United States can lead to a life sentence.

The students I teach in prison who have the longest sentences are, almost without exception, the ones who demanded a jury trial. If everyone charged with a crime had a jury trial, the court system would implode. Prosecutors, defense attorneys and judges use those who insist on a jury trial—often people who did not commit the crime with which they were charged—as examples. Their sentences, frequently life sentences, are grim reminders as to why it is in the best interests of a defendant, even if he or she did not commit the crime, to take a plea agreement. Ninety-four percent of…

James 2:5 Hearken, my beloved brothers, has God not chosen the poor of this world, rich in faith, and heirs of the kingdom, which he has promised to them that love him? 6 But you have despised the poor. Do not rich men oppress you, and draw you before the Judgement seats?

Three beliefs about globalization have propagated since the early 1980s. First, that globalization leads to a reduction in global inequality. Second, that high income growth among the richest will lift the incomes of the poorest. Third, that there is no alternative to rising inequality without turning our backs on trade and technology. The recently released World Inequality Report, the first research study to comprehensively examine wealth and income inequality trends across rich and emerging countries over approximately 40 years, dispels these notions.

Globalization has led to a rise in global income inequality, not a reduction

As Bill Paatalo (who brought this to my attention) says: “You can’t make this s–t up.” Reality is much stranger than fiction. This marks the point where we have entered the Twilight Zone in law where the rule of law is just a guidepost not to be confused with the real rule of men.

Sheila Bair  was forced out of the Chairmanship of the FDIC by Geithner when it became obvious that this was a game she was unwilling to play. Even worse she was making her opposition public, essentially saying that the government was becoming complicit in a criminal conspiracy (not her exact words, publicly but evidence suggests she said exactly that to Geithner and probably Obama).

Let us help you plan your discovery requests and defense narrative: 202-838-6345. Ask for a Consult. 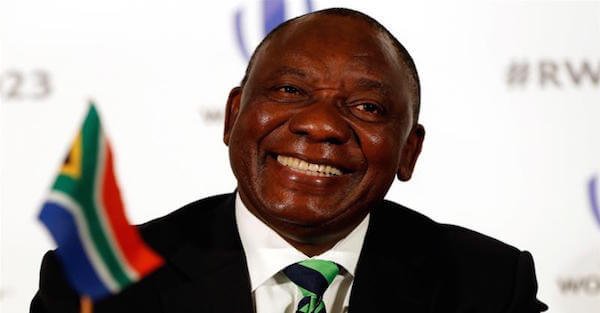 Week before last, I told you about how the brand-new President of South Africa, Cyril Ramaphosa, made an impassioned speech calling for the confiscation of real estate from white land owners.

It was a pretty remarkable thing to say during what was literally his first week in office.

You’d think the new president would take the opportunity to address more immediate, more critical issues– for example, the fact that Cape Town is about to run out of water.

Did you know? You can receive all our actionable articles straight to your email inbox… Click here to signup for our Notes from the Field newsletter.

Cape Town, the second largest city in South Africa (and the most well-developed on the African continent) is about to become the world’s first major city to run out of water.

Please note:  Within hours of posting this article on March 2, 2018 our website was hacked and this article removed.  Apparently we hit a nerve.

Thank you to Investigator Bill Paatalo who is responsible for bringing the loan-level data information to our attention.

It is becoming clearer that the entire securitization fiasco is nothing but a giant Ponzi scheme feeding a shadow banking system.  The big banks have created a system that circumvents all safeguards and protections for investors and consumers and is in fact an illegal racketeering operation taking in trillions of dollars offshore beyond the reach of regulators.

Once upon a time we assumed there was individual…

Current American cultural detatchment from wars in other parts of the world.  Politics is now theater. War on terror has cost 5.6 trillion. Evironmental degradation. Civilian deaths.

We don’t even know we’re being kept in the dark. America’s wars are everywhere. With the mainstream news focus on all Trump all the time, major stories affecting us all get virtually no attention. Did you know, for example, that America is waging wars in 76 countries? No one is paying attention to our numerous wars. Part of the reason, according to Stephanie Savell, co-director of Costsofwar.org at Brown University’s Watson Institute, is that there is a war being waged on information. The rest of the world is all too aware, but here in America they are wars no one notices. More of our tax dollars than…

First published by Waking Times, posted by Global Research in May 2014, this article provides a historical viewpoint. It is of particular relevance in relation to the Monsanto-Bayer merger.

Of all the mega-corps running amok, Monsanto has consistently outperformed its rivals, earning the crown as “most evil corporation on Earth!” Not content to simply rest upon its throne of destruction, it remains focused on newer, more scientifically innovative ways to harm the planet and its people.

1901: The company is founded by John Francis Queeny, a member of the Knights of Malta, a thirty year pharmaceutical veteran married to Olga Mendez Monsanto, for which Monsanto Chemical Works is named. The company’s first product is chemical saccharin, sold to Coca-Cola as an artificial sweetener.

Even then, the government knew saccharin was poisonous and sued to stop its manufacture but…

(Natural News) YouTube tyranny is in full swing as the dominant video site has turned over video flagging responsibilities to radical left-wing slander groups like the SPLC, famous for flagging just about every Christian and Catholic group across America as some sort of hate group.

“The Southern Poverty Law Center is assisting YouTube in policing content on their platform,” reports The Daily Caller. “The left-wing nonprofit — which has more recently come under fire for labeling legitimate conservative organizations as “hate groups” — is one of the more than 100 nongovernment organizations (NGOs) and government agencies in YouTube’s ‘Trusted Flaggers’ program, a source with knowledge of the arrangement told TheDC.”

Under the control of radicalized left-wing censorship, YouTube has unleashed a censorship rampage over the last week, targeting nearly every prominent conservative, independent media leader and even book authors for termination. (This is what happens when Leftists…

Oxfam has outdone itself.  In the murky, squalid business where charity seems to chase, then embed itself in disaster zones like a dedicated virus, Oxfam ranks highly.  In terms of a tally, the number of reported abuses in the charity sector is galloping ahead, with one of Britain’s most noted charities in the lead.

The revelations this month that the charity’s staff sexually exploited victims of the Haiti earthquake in 2010, a point subsequently concealed, have triggered a storm of British discontent.  The revelations included a very active country director, Roland van Hauwermeiren, who revelled in sex parties as he went about his humanitarian work.  Allegations of sexual abuse in Oxfam shops have also made their searing mark.

The organisation has lost over 7,000 donors since the revelations, and MPs on the international development committee overseeing aid have been…